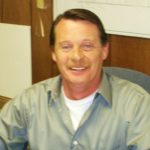 Mayor Russell was born in Joplin, MO and graduated from Parkwood High School (now Joplin High). He has lived in Duenweg since 1972 and is married with three daughters. He became an Alderman in 1996 and has served Duenweg as Mayor since he was first elected in 1998.

Alderman James Williams was elected to the Board of Aldermen in 2019.

Alderman Karen Edge was elected to the Board of Aldermen in 2014. Ms. Edge previously served on the Duenweg Park Board. She also does a great job at taking care of any stray dogs in town, helping them to find their homes.

Alderman William Haldeman was born in Fort Scott Kansas. Few years later, Will moved to Duenweg with his family in 1980. It is here that he grew up and went to school. After graduating from Joplin High School he sought a degree from Missouri Southern State College, now Missouri Southern State University, in business and administration. After earning his degree he met and married his wife Bonnie. They married on November 4, 2006 and arranged their home on Kimberly Street where they currently reside with five children.

Alderman Haldeman now works as a senior mortgage planning specialist at Cherry Creek Morgage and enjoys dedicating his time to the City of Duenweg (2008) and House Inc which is a charity for rehabilitating veteran men.

Dellaca Ferraiz Reynolds was born in Hanford, California in 1978. Her family settled in Neosho, Missouri in 1990, where she graduated High School and received a music degree from Crowder College. Dellaca married her high school sweetheart, Troy Reynolds, in 1996. They have two daughters together whom Dellaca homeschooled since 2002; while also teaching in co-ops, and substitute teaching for College Heights. They moved to Duenweg in 2003 where they have resided since.

Having her grandfather, father, and two brothers serve in the military, and another brother once an officer for Duenweg, Dellaca has a deep respect for those who defend this country both at home and abroad. That call to service led her to seek her seat as Alderman in 2016 where she sits on the council now.